Schubert Wines – Love and Dream in A Bottle

There were many “first-time moments”for me as a press who was invited to interview Mr. Kai Schubert. Who is he? A German winemaker who had a dream to grow his favourite grape variety, and he did it.  He was so passionate about his dream that he travelled the world to find a place that his Pinot Noir could call home, and he found it. Finally, he and the love of his life, Marion Deimling; who’s also an oenologist, chose to settle down in Wairarapa region of New Zealand. There the love continues to unfold through their dedication, passion and what else, the wines.

It was the first time a winemaker actually added me on Facebook before I met him in person. It was also the first time I was shocked to find out that there were only 2 journalists during the lunch and I was fortunate enough to still be able to cover because Epicure magazine had the privilege to do an exclusive. So, remember to check out Epicure about Schubert wines because it was really an extensive interview. It was the first time I felt that it was an interview about wines but a chat with an old friend about relationships and how wines are actually great metaphors to that. It was the first time I had to cut my interview short because I had to go elsewhere and not because the winemaker was busy with further engagements. Mr. Kai Schubert was such a joyful being to be with. Such great sense of humour and most importantly such enjoyable wines!

When Le Fournisseur sent out the invite to the press lunch, I was very eager to be there knowing my favourite red grape variety will be the star of the day – Pinot Noir. I always try my best to go to as many Pinot Noir tastings as possible because I am really very curious about this really light looking wine and yet its complexity can be astounding. Not to mention it is known to be the toughest grape to grow.

I love to play the game of asking people – “If you are a type of wine what would you be and why?” and I will say I’m a Pinot Noir, honestly I don’t really know why. I just thought, because it has the lightest and almost see-through colour which represents a character that hides nothing. It has an air of gentleness and yet when you get the taste of it, some don’t taste as gentle as they look. They too know how to throw some punches of characters.

There were only 3 Schubert Pinot Noir and the 3 of them are available in Singapore; Pinot Noir Estate, Pinot Noir “Marion’s Vineyard” and Pinot Noir “Block B”. Schubert also has one and only amazing Syrah which surprisingly was my favourite of the day, pretty surprising because when there were other options, Syrah didn’t really capture my heart until recently. Guess the only thing that’s constant in life is change and I’m embracing it.

Dumbfounded by my fondness towards Schubert Shiraz and still I want to stay true to my Pinot Noir-ness, I proceeded by asking Mr. Kai Schubert if Syrah and Pinot Noir are human beings, what would they be? Pinot Noir, in his perspective, is a female with lightness and yet capable of more complexity and layers. Syrah is a male, massive but yet less complexity and more liner or one directional. I chuckled when he said that because I could totally relate to it.

Though Mr. Kai Schubert has been busy travelling to be the face of Schubert wines, behind the success of Schubert wines, let us not forget Marion Deimling. Together they are like the yin and the yang, well balanced and complimenting in all ways. When asked what the secret is to their long and still loving relationship especially they need to work together in a business, his answer was really simple – The woman is always right. What can I say? I am a woman and I think he’s right. 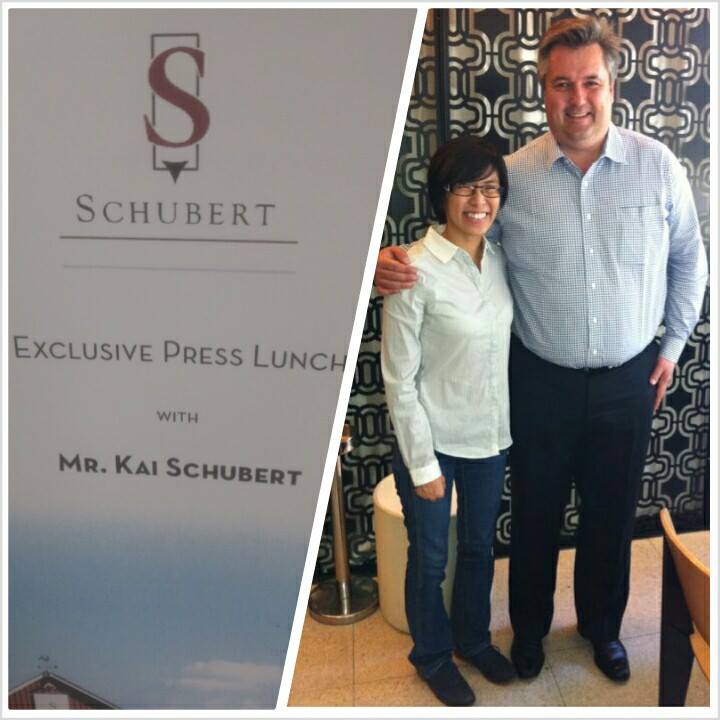 (Originally Published in TheLocalNose.com on the 11th of January 2014)